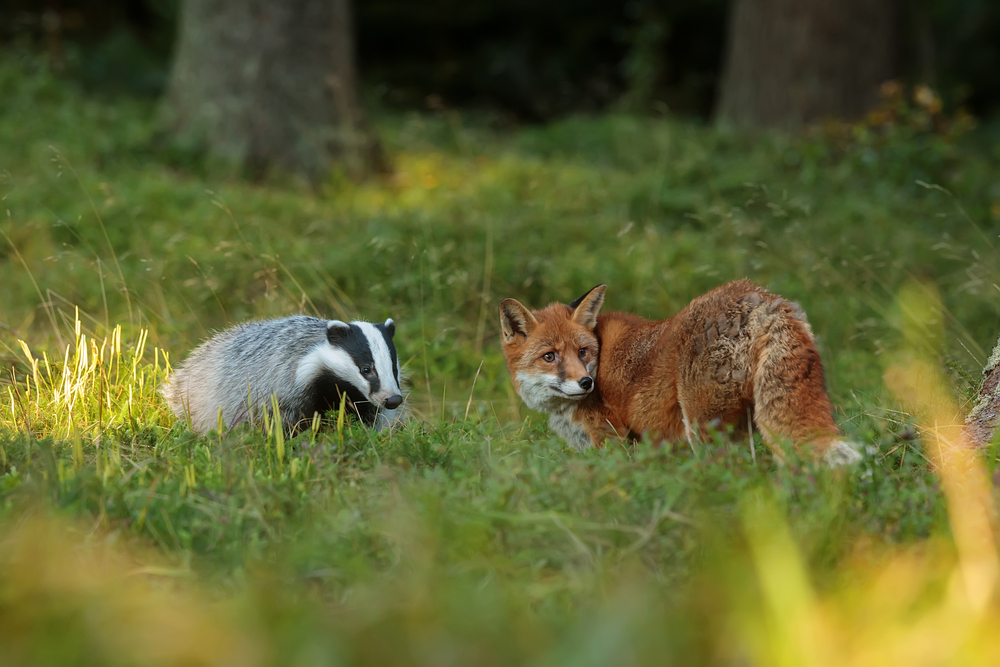 Many of us see badgers & foxes every day in our local areas, but there’s plenty of things about these furry little wonders that most people know nothing about. Here are a few of our favourites!

During his expedition on the ship The Beagle at age 22, Darwin collected a fox that is now referred to as Darwin’s Fox. Originally thought to be a subspecies of the South American Gray Fox, this small grey fox has now been classed as its own unique species. Darwin’s Fox is a critically endangered species and lives in just two parts of the world: a small population on the island of Chiloe in Chile, and a small amount at the Chilean national park.

Badgers have a lot of relatives

Badgers belong to the Mustelidae family, which also includes otters, weasels, polecats and wolverines. Many species in this family have similar body types, as they can be identified by their long bodies, round ears and short legs. Members of the Mustelidae family also have scent glands and give off a strong, musty smell.

Even though foxes are part of the Canidae family, which means they’re related to wolves, dogs and jackals, they aren’t pack animals. Though they will live in small families, or “skulks”, when raising their young, foxes tend to hunt and sleep alone.

…And badgers are more social

Badgers live together with other family members in a clan called a “cete”. While some badgers can be solitary and will move from home to home, cetes can be made up of 2-15 badgers living together. They also share jobs in their living area, including digging and cleaning. All badgers in a clan know each other’s smell and will mark each other so that the whole cete has a shared smell.

Foxes use the Earth’s magnetic field to hunt

Animals like birds, sharks and turtles have a connection to the Earth’s magnetic field, but the fox is the only known creature to use this connection to hunt its prey. According to experts, foxes can see the field as a “ring of shadow” on their eyes that darken as they head towards the magnetic north. When the shadow and the sound the prey is making line up, they’re ready to attack.

A Badger’s home is called a “sett”

Badgers are territorial creatures, with the size of their territory depending and have a number of setts in their chosen territory. They also have a main sett which is the biggest, with some being hundreds of years old and having a number of entrances.

The smallest fox weighs under 3 pounds

The Fennec Fox, which resides in the Sahara Desert, is roughly the size of a small kitten. This cute little creature has elongated ears and a creamy coat and sleeps through the day to protect itself from the burning desert heat. Its long ears have benefits such as better hearing for hunting prey and radiating body heat, allowing it to keep cool. Its paws are also covered with fur so that it can walk on the hot sand.

Badgers are incredibly tidy creatures and work hard to ensure that their sett is as clean as possible. Badgers will not defecate in their sett and will have special communal toilets made of shallow pits away from their sett on the edge of their territory. They also will not bring food into their sett, choosing to eat food where they find it or somewhere else in their territory.

As they reside in the northernmost areas of the hemisphere, the arctic fox has adapted to survive the harshest of cold weathers. It doesn’t feel cold or shivers until the climate reaches -70 degrees. Its white coat also camouflages it against predators, and as the season changes, its coat changes too. Its colour will turn to brown or grey so that the fox can blend in with the rocks and dirt.

Where a badger’s habitat is

Most badgers will form their setts in broadleaved woodland areas, but you can find setts just about anywhere. The main reasoning for where a badger will reside is access to food, so the ideal habitat will have plenty of good worming pasture. This is why they sometimes choose gardens for their setts, as the soil is easy to dig through and has a good supply of worms.

Shop The Range
This site uses cookies: Find out more.