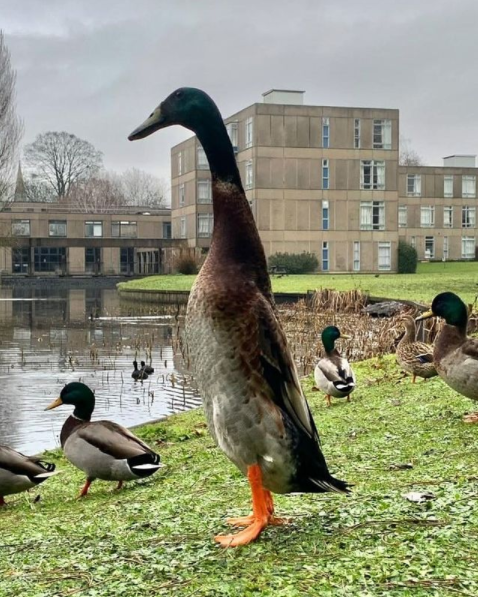 We had the pleasure of catching up with Zoe Duffin, who manages the Instagram account of the spectacular ‘Long Boi’. This feathery bad boy has made a huge splash on social media, amassing more than 30,000 Instagram followers amazed by his size.  Long Boi, who lives on the University of York campus, waddled onto Twitter and Reddit when users spotted him and believed him to be the tallest mallard duck to have ever lived.According to Long Boi’s Instagram, he is a cross between a Mallard and an Indian runner, which is why he has grown to 70cm tall.

We chatted to Zoe to find out more:

What makes Long Boi so special?

Long Boi really does stand out from the crowd. He’s unusually tall and towers over all the other ducks on campus. He’s the only ‘long duck’ on campus so he’s very unique. He has always been loved by both staff and students here at the university, but his fame has sky-rocketed in recent weeks and he now has fans all over the world!

How did you first discover Long Boi and what made you set up his Instagram page?

I first saw Long Boi in my first year of university. My accommodation block at the time was situated in front of the campus lake and I began noticing him on a regular basis. Some friends and I coined the name ‘Long Boi’ due to his stature and regularly went out to feed him and take pictures of him. We decided to make him his own Instagram account as we realised that he was a very unique looking duck. The resident waterfowl are a huge part of university life here at York, so we hoped that he would be popular with other students!

I have always had an interest in animals and have had pet ducks of my own, so I recognised that Long Boi was part Indian Runner duck. This is a domestic breed, meaning that it’s likely he was left on campus as an unwanted pet. Luckily, we have a fantastic grounds team on campus, who ensure that all the ducks and geese are well cared for, no matter how short or tall they may be. Long Boi and his friends are big fans of WildThings Swan & Duck Food!

We see Long Boi now has his own range of merch! What does the future hold for him?

Long Boi does indeed have his own merch, ranging from Long Boi themed stickers and badges, to branded t-shirts and socks! I designed all the artwork for Long Boi’s merch line myself and I’m always trying to come up with new artwork ideas. In the future, perhaps Long Boi will look beyond merch towards bigger aspirations…his fans think he should star in his own movie!

How do you think Long Boi can inspire people to get more involved with their local wildlife?

Due to his internet fame, Long Boi has definitely encouraged people to get outdoors and involved with their local wildlife. I’ve seen a lot of people coming to campus (which is open to the public and a lovely spot for walks!) specifically to see him, not only from the York area, but from all over the country! Whilst looking on campus for Long Boi, people are able to enjoy the beautiful natural surroundings and are able to meet some of our other resident waterfowl, including ducks, geese, moorhens, coots, swans and much more! Long Boi’s growing online presence has the potential to educate his followers about nature and other wild birds, and hopefully encourage people to visit their local parks and wildlife areas to see if they can spot their own ‘Long Boi’.

If you’re heading out to find your local ‘Long Boi’ why not take some WildThings Swan & Duck Food with you? It’s a tasty and nutritional alternative to bread!